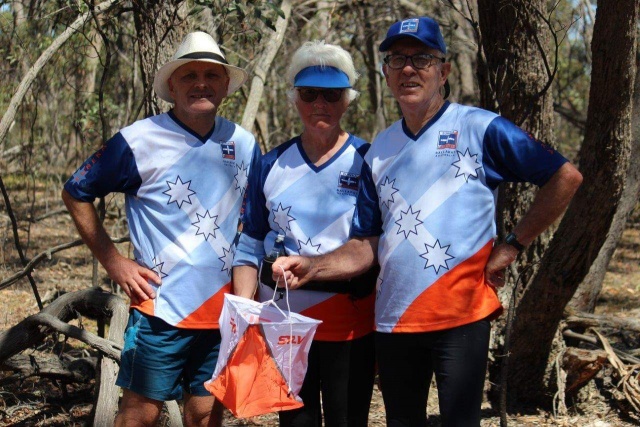 The competitors started late in the day for the long distance final, so many of the Aussies chose to go out to the Middle / Relay model map in the morning. I had done one training in similar terrain before, but this terrain had quite a lot more rock, and was a fun mixture of fairly bland (and slightly scary) hillsides and hilltops with lots of cliffs and knolls.

After a quick lunch we all headed off to cheer on Hanny in the Long Distance Final. The arena was the same as for the qualification – a natural amphitheatre – but now had the added excitement of the start chute (as the athletes started in the arena) and a run-through.

The terrain looked beautiful and open for much of the way, and I was very jealous that I was not running! The women had a brutal 13.6km while the men got close to a half marathon in an epic 19.8km course.

Hanny was starting near the end of the women’s field, and there was of course plenty of cheering for Finnish favourite Minna Kauppi. There were thousands of Fins there which made the atmosphere fantastic.

Plenty of TV and radio controls, as well as GPS, made the race really easy to follow at all times and built the atmosphere for an exciting finish. Despite early speed by Kauppi, some fast route choices by Swede Lena Eliasson soon put her out of the top spot. But of course there is no defeating Simone Niggli, and sailed through to take her 22nd gold medal, a cool 3 minutes ahead. Tove Alexandersson (SWE) just pipped her countrywoman for the Silver.

Hanny ran a solid and gutsy race, with few mistakes, aside from some difficulty in finding a hidden river crossing in green. She reported that the terrain was relatively easy navigation, and favoured those who had really practised running at a high tempo for a long time. She ran her own race (despite the distractions of Niggli, Alexandersson and several others along the way) and took out 22nd place.

The men’s race started during the excitement of the women’s finish, and it was soon time to turn our attention to their radio splits. There was no clear winner during the race, with Edgars Bertkus (LAT), Dimitri Tsvetkov (RUS), Jani Lakenen (FIN) and Thierry Gueorgiou all juggling the lead through the radio controls. Thierry came through the victor, adding another medal to his title of ‘the best male orienteer of our time’. He said afterwards that he would not do any more WOC long distances, and also that he did ‘not enjoy the race very much – too much running’! The Finnish spectators were rapt with Lakenen taking out the Silver, while Bertkus took out the bronze, with less than 2 minutes separating the medals.

Tomorrow we get a rest day, which will be greatly appreciated by some! The middle distance racers will be using the time to relax and prepare for Thursday’s qualification.

Hope you are enjoying the races!