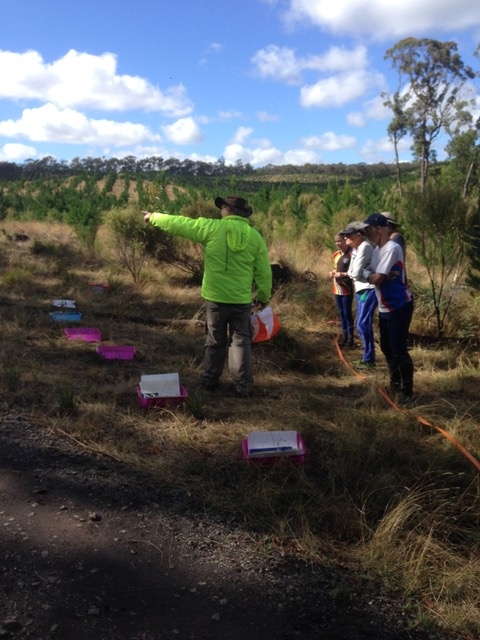 Just wanted to apologise for the lack of pictures recently…I’ve been a bit slack with the camera! The races have also been quite quick, there was only an hour or so after my warm down until the last man was running down the finish chute. I can suggest the World of O Facebook page which has some very good pictures of individuals running through the radio control in the long qualification race.

The arena today was very picturesque, an alpine meadow with a great view across a road to the second last control. The final control was on a tunnel beneath the road with a punishing 200m uphill finish chute. The terrain was a lot different to the long distance, with the courses being mostly downhill and on steep slopes. Some areas were flat, with interesting depressions and knolls, while others were sheer-sided with little detail, and yet others were very intricate sections of cliffs, knolls and small gullies. It was much more difficult running, with moss-covered rocks and a lot of cut wood, even in areas marked white.

Once again, I was the first starter, and my race was doomed from the start! Rushing out from the start triangle, I went to the wrong first control, and then lost four minutes trying to find the right one. I eventually relocated off a paddock to the west, but the damage was done and I had the difficult task of calming the nerves ahead of me. Luckily I hit the next four controls cleanly, but again came unstuck on a boulder in green. I was much too high, and wasted three minutes looking in the wrong places. Interestingly, many athletes lost time here, including Mari Fasting, who lost 9 minutes but still qualified, Simone Niggli-Luder, who lost a minute, and Vanessa, who lost 2 minutes or so. I managed a few more smooth controls before losing time on a dark green gully, and then a boulder in dark green. Overall, the run was very unsuccessful, and even my better legs were hampered by loss of confidence and a lack of planning.

Despite my own disappointment, it was fantastic to watch Vanessa qualify (quite easily!), and make up for her near miss in the long distance. Even with her error, she managed to take 12th place and run very strongly into the finish. Suzanne had a similar experience to myself, losing a lot of time on the first control, and also losing some time on the third last. Despite this, the legs in between were smooth and fast and she came very close to qualifying, in 17th.

We all held our breath and crossed our fingers when Simon ran in strongly to put himself in a tentative 15th place. Sadly, he was soon knocked out by qualifying Kiwi Ross Morrison and a few other athletes, pushing him into 18th. He lost a lot of time at the 4th control and some more time in other areas; however his later splits show that he also clawed back some time on the leaders in the later part of the course. His heat was very fast, with 15th place just 3 minutes down on the leader.

Murray fell victim to a treacherous limestone hole, and sprained his ankle very badly. He walked (hobbled?) back into the finish and was taken straight to hospital, where X-Rays thankfully showed no broken bones. It looked to be a very painful injury, however, and he will be getting around on crutches for at least the next few days.

Tomorrow the team will be watching Vanessa run her middle distance race, which seems to be on some nicer terrain than today. I’m a bit jealous to be honest, as training on the middle distance final maps seemed to be the most fun! Her start is at 12.21 (8.21 AEST). Some of the athletes will be getting out into the Swiss 5 Day races.

Wishing you all well and happy watching,