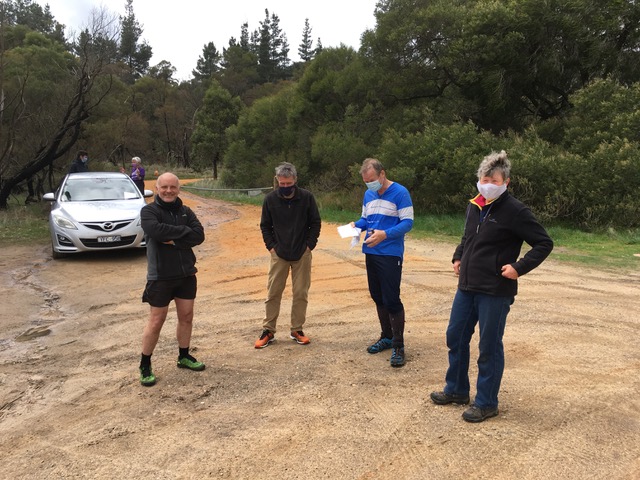 [EurekaO] BUNS at Ballarat North – lived up to expectations!

Nov 13, 2017
Last Thursday evenings BUNS event on the new map at Ballarat North (thanks to Rod and James) certainly lived up to expectations!  Not only was there a bun for everyone but an orange quarter and chewy sweets. Thanks for all the extra effort to the Gray family!
The event got started with just over 10 having a go. It soon developed into either a clockwise or counterclockwise pattern – either #4 or #5 set up the pattern up and down the hills of the Ballarat North suburbs, bush and several parks. The warm conditions seemed to be welcomed after the last event at Mt Helen. Warwick got a early start and posted a perfect 200 in 39 minutes. He lives on the map but given it was the first time we’ve used this area in many years familiarity was no particular help. Then the mass start at 5.31 saw Peter, Judy, Blake,Tsegii, Anar, and BJ take off from the Inkerman Gully reserve at a trot which soon turned to a shuffle and walk as the hills immediately came into play. Rod warned us that the “frog” at #1 might have moved but he would not be drawn on what an ‘FP’ was at #4. The rest of the control descriptions were pretty stand – power pole, seat, for sale sign, drain grate – but several had problems with the knoll, small gum, and dead tree (sometimes you had to be under the tag before you could read the letter!)
But it was the late starters Ian, Mike and finally David who made the best use of time with Ian and David getting all the controls. David eclipsed Warwick’s 39 min with another 30 min 30 seconds finish (same as at Mount Helen). Ian got all controls – but took 8 minutes more than the 45 min limit. Mike (who also lives on the map) was only 1 minute late for a final score of 160. Course setters are getting more cunning using sites where the tag blends in with the sign or pole. And because the re-and-white tags are on objects that might be considered hazardous, there is really no need to remove them! Rod and James had one more trick for us – BJ picked it up quickly – the letters on the tags in reverse order form 20 to 1 spelled out ‘Eureka Orienteers BUNS’. After Belinda’s EUEUEU pattern from Mt Helen, the Lawford’s “all the same letter’ event at Canadian Lakes, Blake’s ‘Eureka Orienteers Run the Country’ at Victoria Park, John’s cryptic ‘back of the map’ scramble at Lake Wendouree Gardens – what will Ian think up next at M.A.D.E. (just off Eureka Street) on the 26th November?
We’ve been really treated to new maps – Brown Hill, Redan, Mount Helen, Ballarat North – over the past two months with one more coming up at the Museum of Australian Democracy at Eureka (M.A.D.E.).  With the return of the Lawfords from Japan and Mark from Europe, the tapering off of the school year and the weather warming up, we are expecting a big turn out on Thursday 26th Nov with the start between 5.30 and 5.45. Bring a friend and discover this historic part of town (the site of the Eureka Stockade) and get a run thru several parks and reserves we’ve never been in – linked up to the northern edge of the popular Sparrow Ground / Lake Esmond map.