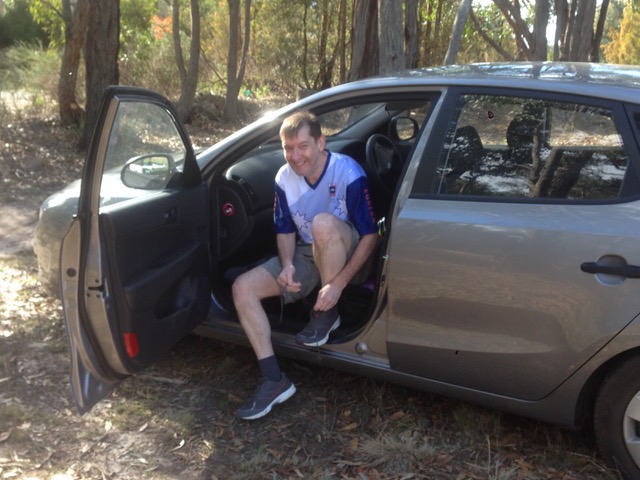 Over 25 club members enjoyed the 2008 AGM festivities at the Gong – right next to the Melbourne Demons Footy Club meeting! “Relay cooking” – from the gas bbq to the wood-fired grate to the plate – was the first activity.

Then the “punching control stands” relay won by the Dicksons (Monica, Declan and Hugh), followed closely by the old guys (Chris, Tom and John), with Dickson Team 2, Ernie’s mob, and the Farhall girls close behind. Fantastic EU sweets were consumed with glee following the relay.

Stuff up of the year awards were made by Tom to John Erwin (Worst Weather Organiser at Nerrina), Warwick (Windy Canopy Flight at Kurucaruc), and Glenda (One Small Step in Qld – one long recovery) with honourable mentions to Chris (Attack Point in the USA) and Mark (Valentine lost in the Grampians). Dale presented the Cake Stall with the “badge bunting” from past stuff ups; Blake played Santa with carafes, cloth bags, and glasses awarded to each family.

The Jenni Jamieson Award – a beautiful wooden and lead-light trophy crafted by Jonathan and Karena – was presented to the Eureka Cake Stall for 2008.

2008 was certainly the “Year of the Event” with Eureka staging 3 “double-header” events at Mt Beckworth (NOL and SS2), Nerrina (Vic MTBO Middle and Sprint Champs) and University of Ballarat (Vic Foot-o Sprint Champs and Campus Challenge)- finishing the 2008 season with the AMAZEing/Cyclic Navigator weekend. Bring on 2009 and the Xmas 5-Days!