A beautiful day greeted the 24 teams in Ballarat who gathered at the Macarthur St Primary School for the 4th Annual aMAZEing Ballarat, staged by Eureka Orienteers.

The event has found a place in the calendar for a number of regular competitors who now come fully prepared with lap-tops, i-phones, tourism pamphlets and all manner of material to try to make sense of the cryptic location clues prepared for the event.

This year the event used points in the north central area of the city as well as the CBD. Participants were faced with some rather unusual challenges including pole-dancing, costume changes, team ten-pin bowling, giant marbles and a gym circuit. In addition they had to purchase Christmas bon-bons for donation to the homeless for Christmas dinner. All in all there were 18 checkpoints to be found in the four hour time frame allowed for the event.

This year bonus points were gained from the team’s bowling score and it proved to be the difference between the two leading teams, the Bagpies and the Rat Raiders who were separated by a single point at the end, with the all-female team of the Bagpies winning the event and their category outright.

aMAZEing Ballarat raises money for charity or worthy causes and this year over $1200 was raised with funds being used to purchase sports equipment for Macarthur St PS and to support two St Patricks SC students who are heading for Tanzania for their gap year to teach English. The St Pats boys and their families assisted on the day on some of the activity points as well as running the popular after event BBQ and drinks.

The event will certainly be on again on the first Saturday in December 2011, so if you are looking for a light-hearted way to have some great family fun pencil in this event now.

Although it bucketed down midway through this event, all teams made it to the finish on time and with smiles entrenched upon their faces. It is to be hoped that most will return to have a go at our major event on December 4.

Many thanks are extended to the Eastwood Leisure Complex, the Games Cove, the Athletes Foot, Messer and Opie and to Blake, who manned the activity in the most exposed site and could not escape a drenching.

Nothing hung upon the results but for the record they are published below. (Max score was 800, within 150min)

Although the team of runners was small this year, just three teams, some very good results were achieved on Sunday at the Woodlands Park Estate, just north of Tullamarine. The map area was confined to what is known as the back-paddock and has some interesting granite outcrops but is generally open with scattered trees and some areas of fallen scrubby timber.

On the B Course, Chris Norwood, Aislinn Prendergast and Roch Prendergast recorded a very creditable second place, while on the C Course, Ernie Christopher, Mark Valentine and John Erwin grabbed a third.

In our other team, the mixed combination of Anitra Dowling, Judy Prendergast and Tom Norwood, had their hopes dashed by an administrative error, which had Tom left with the Long leg, although as you might expect from the fit 80 year old, he duly completed.

The trend to run relays on this type of terrain seems to have gained favour, so all members should consider having a go next year – it is worth double points for the Rockhopper Trophy as well!

The EU storeroom at the Eastwood Leisure Centre is rapidly nearing completion – after more than a year of planning and preparation! With Tom swinging his hammer, Blake on the saw, Mark measuring and nailing, and Richard and Heather sorting out the gear boxes, Saturday 31st July finished with the storeroom 90% complete. Tom and Blake are really proud of the control stand storage with all 80 of the EU stands in 1.5 by 2.0 metres of space. 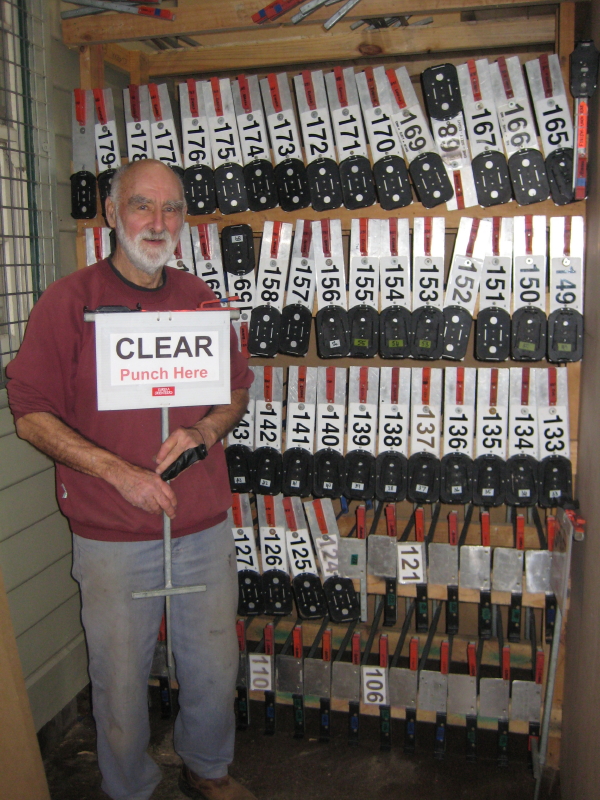 Easy identification and efficient storage should make control stand pick up and return a breeze (assuming we can just get them in the right locations in the bush). All the big result boards, tables and tents fit nicely into new low spaces with high storage for light items – empty water containers, drink cups, toilet paper, plastic buckets, trays, and corflute signs. Two large racks for event material in storage cubes round out the well-organised storeroom. But the biggest benefit is the location – just south of the Coles/Woolworth cark park in downtown Ballarat on Short Street – such that the club’s logo and signage will be in front of the passing public eye at the Eastwood Leisure Centre.

Eureka Orienteers is one of several clubs, including basketball and karate, and several community groups to use the centre for meetings, storage of club gear, and promotion to the sport-conscious Ballarat community. Watch this spot for the upcoming grand opening in August!

JWOC 2010 has started in Denmark this week, with ex-Eurekans Belinda and Ian Lawford in the Australian team.

The sprint event was held at Aalborg University on Monday, on a very intricate campus map – see attached – I think this is the Mens’ race, how would you have gone…? (right-click and open in a new browser window for larger size) 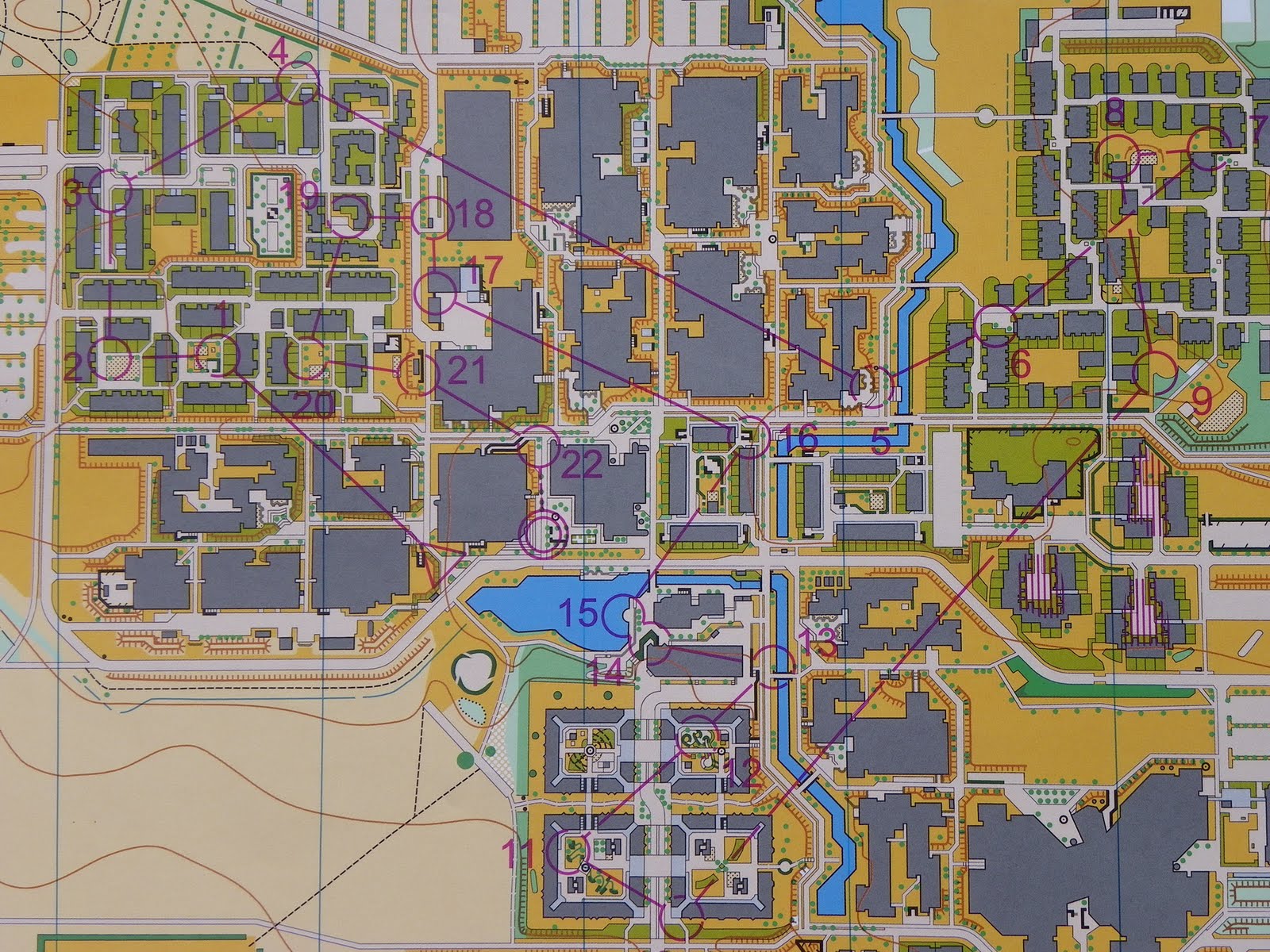 The EU executive has scheduled 7 local events from April to October – all within 10 minutes drive from Sovereign Hill!

These low-key events will be held on Saturdays with start times from 10-12 noon. Each event will use the new Eureka SI system – so bring your SI stick or borrow one from the club on the day. Full-colour maps at scales from 1:5000 to 1:10,000 will be used to show the detail in these parkland and bush areas within the city limits. Roch Prendergast, our new Secretary, will be making several new maps and coordinating the series with help from club members on the day. Please put these dates in your diary.

24 July Black Hill (used only at the DuO n January)

The OA Executive approved at the weekend a 9–strong mtbo team for the World Championships July 11-17 in Montalegre, Portugal. Grant first represented Australia in 2002 in the MTB WOC in Fontainebleau, France as a 24-year old when Emily Viner (now residing in Canberra) won Australia’s first Silver Medal in the Long-Distance Championship. Selected again in 2006 in the Australian team, Grant was unable to take up the selection due to work commitments. So after riding strongly in the 2009 Selection Trials at Woodend and regularly competing in mtb events around the state during 2009 and early 2010, Grant finished 6th and 3rd at the 2010 Selection races in NSW to make the team again as a 32 year old. The strong men’s team of Adrian Jackson, Alex Randall, Steven Cusworth and Grant – all Victorians – will carry the flag for Australia. So “good luck” and trust that Grant will be able to ride well in the tough hilly conditions expected in Portugal.

3 Emily and Tom Are Proud Parents!

Emily (née Viner) and Tom Walter are the proud parents of Mica Leo Walter – born on March 15th – weighing just over 7 lbs. We hope to see the Walter family down in Ballarat in the next 3 months so we can get a first-hand look at young Mica. He’ll probably be on his first scooter bike by then!

Latest news on our new equipment store at the East Leisure Centre is that the concrete stumps are in place so the floor and walls are next. Our builder expects it will be a matter of a few days – maybe as early as the end of April – to have the new storeroom to the lock-up stage. Then we’ll have several EU working bees to fit out the shelves, paint the place, and move the equipment from 6 York Street. Keep checking your emails to see when you can get in on the final stages of this long-anticipated move.

Several members will be heading north to Canberra for the annual 3-Days Easter competitions in and around Canberra. Roch, Judy, and Aislinn, Tom and Lesley, Chris and Glenda, Peter J, and the Lawfords (Geoff, Jenny, Belinda and Ian) will be there. EU wish them well – and hope a resounding “Eureka” will be heard several times at the presentations on Easter Monday!

I am very pleased to be able to anounce that, despite some delay, Orienteering Australia has ratified the recommended OA MTBO teams to WOC and JWOC 2010.

The selectors wish to congratulate all the team members and wish them well in their training and performances overseas.

Today’s 3-event menu served up by Roch and Chris seemed to satisfy the elite’ appetite for tough course and an exciting mixed relay in the challenging goldfield terrain in the Bryce’s Flat and the Blowhole. It is the last big event for the club this year as the EU executive has decided that local events and school development will be the emphasis for 2010. Special thanks to all club members who made the big effort today – Roch, Judy and Aislinn Prendergast, Chris and Glenda Norwood, Dale and Blake Gordon, Richard and Heather Bice, Tom and Lesley Norwood, Ernie and Maureen Christopher, Helen and Terry Haebich, Ian Chennell, Peter Jones, Warwick Williams, Ken Dowling, Geoff, Ian and Belinda Lawford, and John Erwin. We did get some special help from Jim Russell (controls and stands from BG), the Sunleys (tent pitching), Kevin Maloney (signs) and all the enthusiastic runners on the day. Sure there were some stuff ups and lack of this or that on the day – but we seemed to solve most problems that always occur when it rains! Enjoy your Monday holiday – while we unpack the wet gear at the club store.